Some people believe that grease can serve as a quick, short-term solution to a leaking seal, including for a final drive planetary hub leaking gear oil. Contrary to what they think, this isn't a good short-term solution and can be destructive over the long haul. Why? Read on to find out! 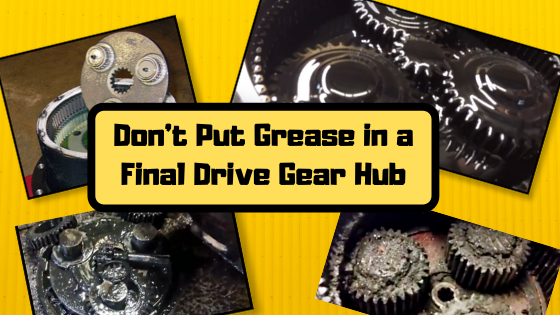 You've got a leaking seal, and you figure a quick fix that would keep your planetary gears lubricated without having to pull the final drive and replace the seals. It sounds feasible, right? Let's start to what starts to happen as soon as you pack grease into a gear hub.

If you don't manage to pack the hub to capacity (which is going to be pretty difficult to accomplish), then some of the gears and bearings won't have enough lubricant. That's because grease pretty much stays where you put it ... and if you can't fill up the hub, it's not going to be able to distribute itself all around like gear oil. What about when it heats up, you ask? It still isn't going to flow like gear oil.

This is essentially lubrication starvation because not all the planetary components are going to get what they need to prevent premature wear during startup and operation. And, if that premature wear isn't stopped, expensive catastrophic failure will result. The result will cost much more than the downtime and parts associated with replacing a leaking seal and putting some fresh gear oil in.

Now let's consider the second case: you manage to pack that gear hub completely full with grease. Everything might be OK during startup, what happens during operation? That grease is much more viscous than gear oil, and the gears and bearings basically have to churn through that gear oil. It takes more power to move at high speeds through that thick grease, which leads to some serious power loss.

The motor is also going to start to overheat because the grease is actually creating more friction and the heat from that friction isn't conducted away by grease like it is by oil. This friction will also lead to components that wear out much more quickly than they should, and replacement involve money and downtime.

And, regardless of whether you over fill or under fill with grease, you are going to increase the chances of getting contaminants like sand, concrete dust, dirt, water, and other unpleasant particles in your planetary hub -- and that spells disaster, plain and simple. Seals are meant to keep those things out, while grease can actually draw them further into your gear hub. Again, there are going to be some expensive part replacements in your future if you opt for grease and the contamination it can pull into your planetary hub.

Clearing Out the Grease

If you were using grease as a short term fix, you have to consider how you are going to get all that grease out of your hub. With gear oil, you can drain it out (assuming you do change it often enough that it doesn't turn into something like pudding). With grease, its going to be a bit more of a challenge.

Remember that final drive planetary hubs are designed to use gear oil, not grease. Grease isn't even a temporary solution when it comes to leaking seal. All it will do is lead to more expensive problems and will not fix the seal. So, don't put grease in your final drive gear hub! Get that leaky seal replaced -- you'll save time and money in the long run.