Skid steer loaders (SSLs) and compact track loaders (CTLs) have quite a bit in common – hydraulic motors, compact size, and maneuverability – but they also have some major differences. In this blog post we are going to look at four major differences between SSLs and CTLs.

Available in brands including Caterpillar, Bobcat, Gehl, Kubota, and Takeuchi, both skid steer loaders (SSLs) and compact track loaders (CTLs, also known as multi-terrain loaders) are part of an ever-growing segment of the compact equipment market. They may look similar, but they have very major differences that important factors such as operating costs and functionality. 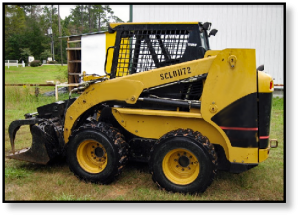 Difference #1: How They Move

The most obvious difference between a CTL and a SSL is how the move: SSLs have wheels and CTLs have tracks. Because of the wheels, SSLs are more maneuverable than CTLs because of their zero-turn radius. SSLs are designed to move quickly and make tight turns. CTLs are designed to slopes and more challenging terrains such as those found in more undeveloped areas. They are also designed to provide more traction for pushing loads. 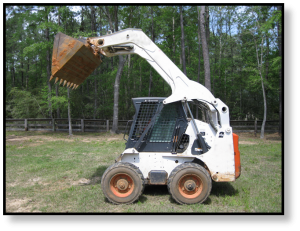 Wheels do limit the type of terrain that is friendly to skid steers: their tires perform best and last the longest on hard, smooth surfaces like rock, concrete, or asphalt.

This is because CTLs use tracks, and that is why they work very well on sensitive, unstable surfaces and are considered useful for grading. CTLs won’t leave ruts like SSLs will, and they can go where SSLs can’t.

CTLs are also designed to be stable on unstable ground conditions like mud or snow. They also work very well with slopes. The ability of CTLs to work well on slopes and softer ground accounts for the difference in tipping load between an SSL and a CTL. CTLs are rated at about 35% of tipping load, but SSLs are rated at about 50%. In general, CTLs are going to be more stable.

CTLs cost about 30% more than an equivalent SSL, and the maintenance costs generally run higher. However, actual operating costs depend on the application.

For example, using a CTL instead of a SSL for construction work typically costs about 25% primarily because of excessive wear on the tracks. For most projects, SSLs are usually cheaper.

Here’s another thought, though: because CTLs can handle muddy, sloppy soil they can return to the job site before a skid steer can, which can reduce downtime due to weather and help keep projects on track for a timely completion.

In short, a skid steer is going to perform best in good conditions, while the compact track loader thrives on adverse ground conditions or on sensitive surfaces. While they are both hydraulic — with final drives for the wheels/tracks and hydraulic power for the boom and attachments — they are designed to excel at very different tasks.